We put together a recap of our Koha news and educational content for the month of July in case you missed anything!

Do you have multiple branches that your patrons can check out items from? Do you share specific resources with other libraries and want these materials to "float" around your branches? See how you can set up rotating collections in the Koha ILS.

The Koha Community has released the 21.05 version of Koha. In this blog post we will provide the features and enhancements coming in 21.05.

Kelly put together a short video looking at z39.50 cataloging in Koha using both the basic and advanced cataloging options.

In a recent Koha update, the ability to archive purchase suggestions was introduced. This blog post will walk through how to do this and even how to undo an archived suggestion.

Kelly put together a short video tutorial to show the integration with Koha and EDS.

Koha Question of the Week: How Does Content Cafe Integrate with Koha?

Koha Question of the Week: How Does Content Cafe Integrate with Koha? 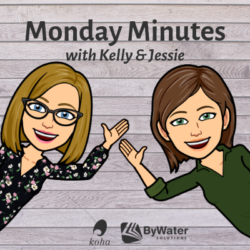 Kelly and Jessie discuss the Cities and Towns option in Koha.

Kelly and Jessie will walk through the steps of setting up audio alerts and also customizing the sounds the alerts make.

Kelly and Jessie share a new enhancement in cataloging that will allow libraries to choose a publisher from a dropdown menu.