Suzanne Fayle, a ByWater partner from Roseman University was up next at KohaCon13. 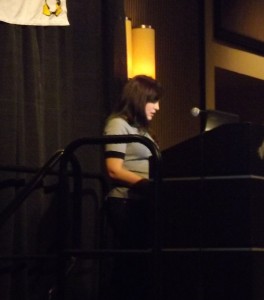 When Roseman when to look for a new ILS they needed:

They decided that they did want a support vendor because they weren’t sure of their skill set in house. They decided to look in to open source and wanted to learn what “open source” would mean to them. They looked Koha and Evergreen and did a ton of research on both including poking at the demos.

Some of the things they wanted:

After exploring options they decided to pick ByWater as their support provider (YEAH!) and started the migration process. They also decided to do some data cleanup on data and set up some new procedures. When they told their vendor that they were leaving they found out that they needed to also update their budget expectations because the vendor wanted to charge them 4x what they thought to get out of their contract and get their data.

My favorite quote: “We didn’t have to do much of the work – it was all ByWater”

My second favorite quote: “Training was the most fun part of the process”

After training was the testing period where they tried to break the system (my suggestion to them).

Go live was like going from “black and white to technicolor”. Everything was so much better. There were a few settings that weren’t set before go live and a few tweaks that they had to make after go live.

Most of the things Suzanne would have done differently were related to communication with her team.

In the future they hope to contribute more to the Koha community – starting with the presentation!