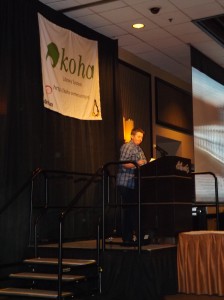 JD (Joanne Dillon) was up next to talk to us about Kete! Kete is where the Horowhenua Library stores their digital content (Koha is where the physical stuff is cataloged). Like Koha, Kete is open source and anyone can help contribute to it. Kete’s key feature is that it allows the community to add content to it. Kete is not just a repository, it’s also a story telling tool with the ability to add comments to entries.

Some of Kete’s values are:

The library has also integrated Kete in to Koha by showing Kete results alongside Koha results.

While Kete is pretty darn awesome it was developed in 2007 and is starting to show it’s age so it’s time for a redevelopment project. There is a team of experts working on this project in New Zealand. To upgrade it the following has been done so far:

Front end development of the Kete website with a usability review

JD invites us all to look at Kete and participate and help make Kete better!