KohaCon13: Calm at the centers of the distributed whirlwinds

KohaCon13 opened up with a talk by Galen Charlton our 3.14 release manager. Galen started with what we have to look forward to in Koha 3.14. First and most importantly is what’s new for the patrons: 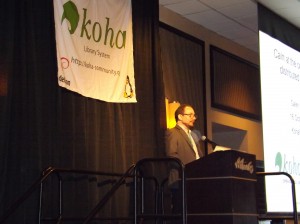 On the library side there are improvements as well!

Sys admins have some things to look forward to as well:

But that’s not it! Developers have something to look forward to too:

Next is innovation and conservation. “Koha is not done yet!” We have to be careful to not take away things that people need, but to not keep things that are outdated. And when adding new features we need to make sure we’re adding useful features.

Given that – what is the lifecycle of a feature according to Galen?

Galen went on to talk a bit about more about our process and the most important thing (I think) that he said is that we’re all working toward the same thing! We may not always agree or go about it the same way, but we all want a better Koha. Galen asked us to keep gratitude in our minds.