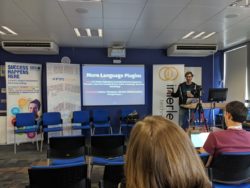 Many of you have probably heard that Elasticsearch is coming, and each year we have seen a few more libraries actively using it in the wild. This year at Kohacon we had a talk from Philip Kren who works at Elastic and it was a fascinating journey through what is possible when using ES as our search engine.

Philip's talk took us through a brief overview of the processes of getting records into Elasticsearch, and searching them. He covered the phases of indexing, analysis, and searching, touching on the ways that one can build complicated mappings and queries by starting from very simple pieces, and combining them together. His talk gave a great sense of how ES works on the small scale and how it can be built up for large scale work. I highly recommend watching it here.

After Philipp's talk we held a Q and A session, talking about the current code in Koha, what can be possible in the future, and what we are working on right now. The discussion covered a lot of ground, and opened a lot of possibilities to pursue. This session was also recorded and can be viewed here.

One of my biggest takeaways from these talks was hearing that the libraries using ES at the moment are very close to running on the core Koha code, without any extra patches. In the initial adoption of ES many institutions had found it necessary to add additional patches to Koha in order to handle specific local needs. This conference in talking with these libraries it seems the code base has expanded and become flexible enough that custom patches aren't needed.

There is still a lot of active development ongoing, you can checkout current work on bugzilla here.

Here at ByWater we have been testing with the Lancaster Theological Seminary (https://library.lancasterseminary.edu/) and I will be presenting with Andrew Fuerste-Henry, one of our educators, and Myka Kennedy Stephens, the Seminary Librarian at the Koha US conference in Pueblo, CO in September.