The Koha Community is Where It's At

Attending the recent North American Koha Users Group (NAKUG) meeting in Wenatchee, WA, I was struck once again by the uniqueness of the Koha experience. I have attended a number of ILS users group meetings, both proprietary and open-source. With proprietary software, getting new features into your chosen system often turned into a Sisyphean quest, what with making a request, justifying it, debates, votes by the user group, prioritizing requests, etc., and even then, it was up to the vendor to decide whether to include it or not. And for bug fixes? Forget about it. Bugs were fixed if and when the vendor chose to fix them. 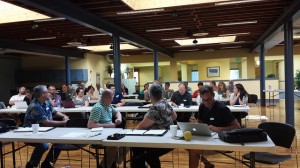 With open-source, if you want a new feature, you file a bug report. If no one else wants to work on it, YOU have the power to work on it yourself. The same goes for bug fixes. As the saying goes, “with many eyeballs, all bugs are small,” and with Koha those eyeballs can include yours.

One of the things that pleased me most at NAKUG was at the end of the conference. As we left on Thursday, some attendees were preparing to spend Friday setting up Debian Virtual Machines, and installing Koha so they could learn how to work on bugs and patches themselves. What proprietary ILS lets you do that?! That just blows my mind. I’m sorry that I did not get to see how that went myself, but unfortunately the ByWater staff needed to head back to Seattle early on Friday. I hope that part went well, and we’ll have a new crop of users taking control of, and contributing to, THEIR ILS.

The Community is truly where it’s at, and no community shows that better than Koha’s. Well done.