Today’s guest post is from John Andrews at the Washoe Library System.

In previous version of Koha, we used the script from the Koha wiki to remove the “return” column to the right of the “Renew” column on the Checkout page. After the upgrade, we attempted to update this script by replacing the “issuest” id with the “issues-table” id, which initially looked like it should have worked, however this had no effect. After some digging, it looked like there was an additional column (“Export”) that may have been the column seen when the script called for the ‘last-child’. So, tried it with nth-child instead, which worked to eliminate the column from the header row, but not from the table body. 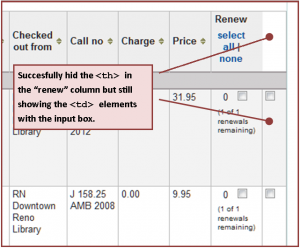 In the end ditching the Javascript and adding this CSS to IntranetUserCSS solved the problem!

Simple and elegant, with many thanks to Kyle for recognizing that the script was unnecessary and that this could be accomplished just with CSS; the CSS-only option is simple and elegant and works like a charm!