Video Tutorial for Patrons using List on the OPAC

This blog post will go through the steps on using lists for the patrons of a Koha Library. There is a video tutorial at the bottom of this blog that is about 3 minutes long that will also go through using lists and some of the fun features!

There are two different types of Lists on the OPAC for patrons to utilize. The first are called Public Lists. This is a way a library can highlight a certain portion of their collection in a easy and retrievable way - through lists. The other type of lists are Private Lists. Private lists can be created by a patron for their own personal use. Below each type of list will be described in more detail. Remember, each Koha library can be different, so all patrons may have different abilities with the list feature.

A private lists is for patrons to store books/items from their library catalog for later use, to share, or track. Examples on how private lists are used, to-be-read lists, book club ideas, State award winners to read, books on a specific subject and so much more!
A patron must be logged into their public catalog to create their own private list. Once the patron is logged in, they can easily search for a title, subject or specific author to start creating a list.

Once an item or items are found, the patron can easily check mark the titles on the left. This feature would be if the titles are in results view and there is an option to save. The save button allows the patron to save to a cart, an existing list or a new list.

In this image, a search was performed for the author John Grisham and filtered to only see Audiobooks. For example, my grandfather only listens to legal fiction based audiobooks. Choosing New List, will prompt the patron to name their list and add these books that have been selected. After the list has been saved, the patron can continue looking for other titles to add to a list, or access the list by choosing the List option at the top of the OPAC screen.

The patron can now access the list by choosing which list to look at. Once the list is clicked on, the options on what to do with this list will appear. This is my favorite part about lists. From here the patron can send this list to a friend (my grandfather perhaps), add any / or all of these items on hold, remove items from the list, print the list, change the order of the list and remove title to this list. In the image below, between the two gold stars, the patron will see all the options available!

In my example, my grandfather and I share the same library and I can easily find him books on our joint library catalog and email the list to him. He will show this list to the librarian to place them on hold or find them on the shelf next time he is at the library. I am sure the librarian would look up these items for him also, however, as he has a librarian in the family- he will always refer to them first! And this process works super easy for him! 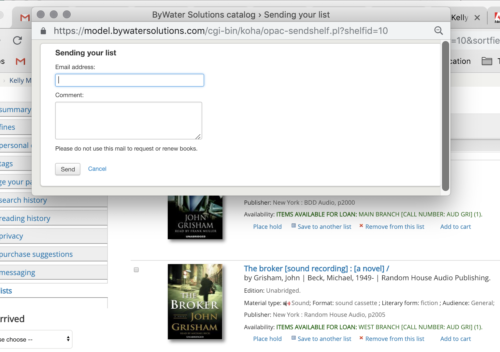 In addition to Patron’s Private lists, a library can provide Public Lists to their patrons. These public lists have been known to advertise new books added to the library’s collection, NY Times bestseller books that the library owns, a local author collection, and so much more! If a patron’s library utilizes this Public Library feature, the public lists will be found at the top of the OPAC screen under Lists. If there are both Public Lists and Public Lists, they will all be displayed in this dropdown

Once a public list is chosen from this dropdown, the same options as a patron had for private lists will apply for the public lists. These features include, placing an item/s on hold, sending this list, printing this list and more.

Another feature that is very useful, if an item is part of a public list, there will be an indication in the book details on both the result screen and detail screen of the item.

This is a great way to find more books that the patron wasn’t even aware of- but since they are part of a list, they can easily see this. 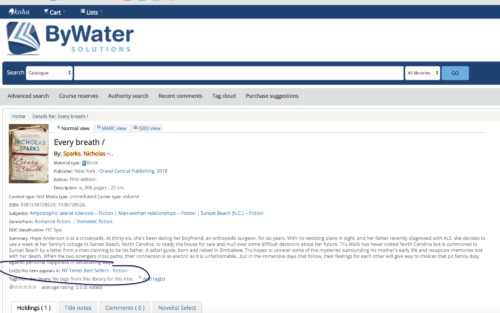 This feature is especially handy if a patron was looking for local authors and only knew one local authors name. If the library had a public list highlighting Local Authors, the patron could find more!

Check out what your library has for public lists! I am going to bet if the library is using Public Lists - patrons will find one that they are going to use and love and hopefully tell their friends.