Although Patron Clubs are not new to Koha, the ability to place holds for the Patron Club is! This feature was sponsored by South East Kansas Library System.
The purpose of Patron Clubs is to allow libraries a way of collecting enrollments through Koha for programs held at the library. A patron could be enrolled by the staff at the circulation desk and also the patron could potentially log into the OPAC and enroll in the club themselves.

In the upcoming version of Koha, the library can take clubs another step further- allowing the ability to add patrons by the club to be placed on hold for a book. A library has a Science Fiction Book Club and with their 10 enrollments, it would be time-consuming to add each member to the chosen title of the month hold list.

Here is a short tutorial video on how this new feature works to save so much time!

A new feature sponsored by the South East Kansas Library System will allow a library to bulk add holds for a title from the club’s enrollments. Each member will be placed on hold in random order.

For more information about the Clubs Feature:

Setting Up the Patron Clubs feature in Koha

To use this new Clubs Hold Feature:

From the Club page (found in Tools)- under Clubs, find the Patron Club in which a hold will be placed.

Next to the club, there is an Action button.

Choose the option in the Action drop-down “Search to Hold”.

Clicking “Search to Hold” will allow the book to search through Koha.

When results are populated, the Place Hold For Club will be in line with the results.

When the Hold Details populate, all members will be listed on the Hold Form.

The Holds will Populate, each member will be placed in order to receive the Item. 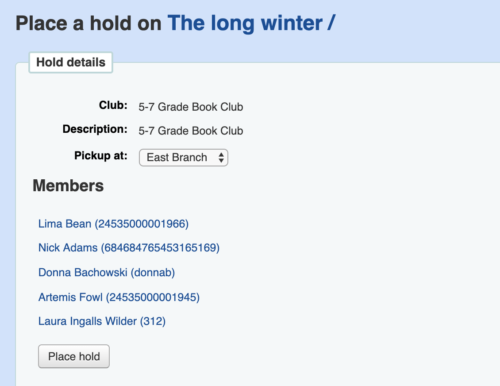 Placing Hold through a Search

The club can be searched when placing a hold instead of going through the Tools module. To place a hold for a club through a regular item search, first search the item.

Next to a Patron Search, there is now another tab to allow clubs to be searched when placing the hold.

Clubs that match that search will appear and the club can be chosen.