Making Change! We are not talking about making a change to the world or ourselves, but making change for the patron!

Now in Koha, when a payment is taken in the Accounting module, Koha will indicate how much change to give back to the patron. My first job was working with money and using an old cash register without a change feature- I did horribly figuring out the change to give back and also felt very stressed thinking about making change for someone.

This added feature will allow staff to easily give back change without having to feel stressed! Yay!

When a patron wants to either pay the full amount of their fines or a selected fine in Koha, this new change feature will appear.

Fill in the amount of money the patron gives in the box marked “Collect From Patron”. 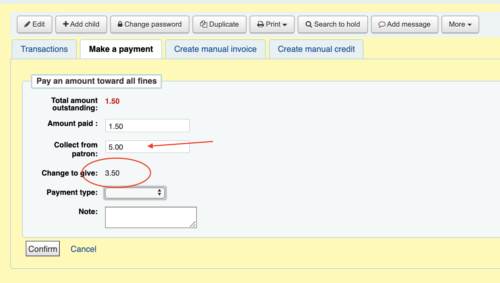 Hit Tab to populate the “Change to Give” box. If Enter is hit after the amount is entered, a popup box will indicate how much change to give in which the staff member will confirm this.

The amount filled into the “Collect from Patron” is not stored in Koha and can not be accessed at a later date, this is for this transaction but not recorded.

For more changes to the Accounting Module in Koha 19.05, see this Monday Minutes Tutorial!