Koha Question of the Week: What are Multi-Item Holds in Koha?

Question: What are Multi-Item Holds in Koha?

Answer: This is a way to allow patrons to place multi holds on one record. This is helpful to some libraries with records that have a lot of items attached, which would give the patron the ability to place holds on a few items at the same time.

Within the Circulation and Fine Rule Matrix, there is a column to customize a library's choice on what circulation rule can have the ability to place more than 1 hold on a record. This column is called "Holds Per Record". If the library increases this to a larger number than 1, a patron or staff can place multiple holds on the same record.

One more circulation rule to consider when thinking about multiple item holds is "OPAC Item Level Holds", these are their rules in the Circulation and Fine Rule Matrix, that would benefit from allowing patrons to not only place multiple holds on a record but also choose which specific item they would like to place on hold. This is extremely helpful when libraries have magazines, DVDs with separate discs, and also maybe encyclopedias within the collection. 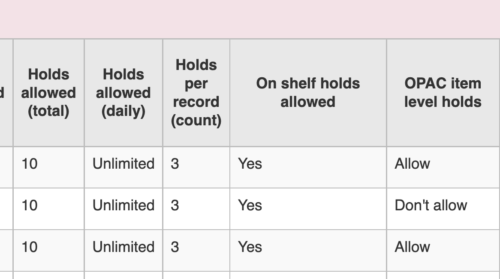 When this rule has been altered, a staff person will see a new option when placing a hold, there is a new field to allow a numeric number entered into a box with exactly the number of holds the staff would like to place for the patron: 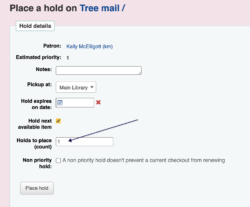